Today, I want to show you the current status of my knitting projects. I haven’t had as much time to knit as I’d like.

Little Wolf was home sick one week and then I had to pick him up early again the next week. He fell on the playground right onto a paved walkway, face first. He looked like he’d been in a serious fist fight. I took him to the dentist to get his teeth checked. Luckily, no tooth was broken, damaged or loose.

In the afternoon he was already playing wildly again and the next day he went back to kindergarten, proud of the bruise on his face, the swollen lip, and bloodied nose. He keeps telling everyone we meet, regardless whether they have already heard the tale or not, that he fell on the playground and had to go to the dentist. With a big grin on his face like it’s the most exciting thing that has ever happened to him and he hadn’t been in tears over it just Monday noon. That’s almost-4-year-olds for you, I suppose. 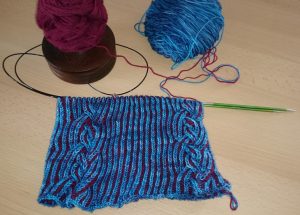 Yarnia – The Grand Quest Blanket MKAL. I’ve been knitting on it since the first clue came out March 3rd and just finished the first clue on Wednesday. So far it’s been a lot of fun. And let me add a spoiler right here: There is going to be a picture of the finished first clue at the end of this blog post. So don’t scroll down too far if you don’t want to see it.

As the name says you knit a blanket and don’t know what it will look like when you start. Every clue is one more square and in the end, you sew them together. It’s double knitting so you have the same design on both sides just with main and contrast color flipped. And it’s fantasy themed which is right up my alley – I got to knit my first dragon on the first clue, so I’m a happy knitter.

The fun thing about this is: it’s a roleplaying game as well. You get to roll a character and cat companion and adventure in a knitting themed fantasy world – dice rolling included, of course.

My character’s name is Varna, she is a Dual Knitter and gets to wield dual knitting needles. Her steadfast, time traveler Bombay cat companion is called Bibi. And yes, you get to roll the personality and special ability of the cat as well.

You go on an adventure, as you do in roleplaying games, and at various parts of the story, you get to roll a die or two. Those rolls then determine which patterns you knit. You use all the typical roleplaying dice (d4, d6, d8, d10, d12, d20, d100) throughout. If you don’t have a set of dice around or don’t want to roll the traditional way you could look for one of the many free dice rolling apps for cell phones for example. I’m using RPG Simple Dice on my android and am happy with it. I prefer rolling actual dice but since I do most of my knitting at night when the kids are asleep, I’d rather not risk waking them with the noise my heavy metal dice make on the table top… 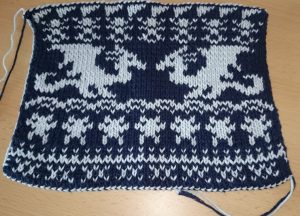 Yarnia – The Grand Quest Blanket MKAL clue 1. Yes, I’ve messed up the edging at the beginning a little. I decided not to care.

The only thing I missed in the first clue, was fighting with dice rolling, using your skills and items. I suppose this will happen more in the later clues as the first clue was basically just a story set up.

I’ve chosen to knit this out of cotton yarn and am using Drops Paris Uni Color. This is a blanket, I have small kids and only recently had some trouble with stains in woolen things… I decided to go the safer route. Had some trouble with tensioning the yarn at first, as one strand was always a bit too loose. Cotton is very slippery. But by the end of the first clue, I had gotten the hang of it.

Are any of you participating in the mkal? Who is your character and how have you liked the experience so far? Please, let me know in the comments below.

Next time on this very blog, I’ll tell you all about my adventures in removing cocoa stains from the pretty knit dress Tiny Wolf wore on Christmas.

Knitting through the chaos

1 thought on “Knitting away”