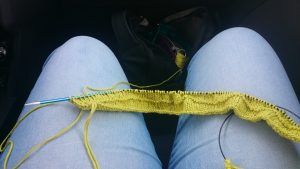 Knitting in the car on the way to Boltenhagen

So we’re back. And the vacation was great even though the weather wasn’t as good as it could have been. Tiny Wolf got a cold of course. But she spent more time being wet than dry, really. And she just loves water (in German we say “Wasserratte” to kids like that).

Little Wolf can swim now. Actually, I should say, he doesn’t sink anymore and stopped being afraid of water spraying his face. With water wings and dog paddling, he can swim all the way through a decent sized pool multiple times without any problems.

We had a lot of fun at the beach and swimming and generally running after the wolflings. Them eating ice cream every day. And going to bed far too late. Us going to bed fairly early, drained from the day.

It was exhausting – as vacationing with small kids (or wild beasts, really) is. But also strangely relaxing. Every time we go on vacation with the wolflings I am amazed at how refreshed I feel when I return – even though such a vacation seems like anything but relaxing. And I did get to knit this time, woohoo! 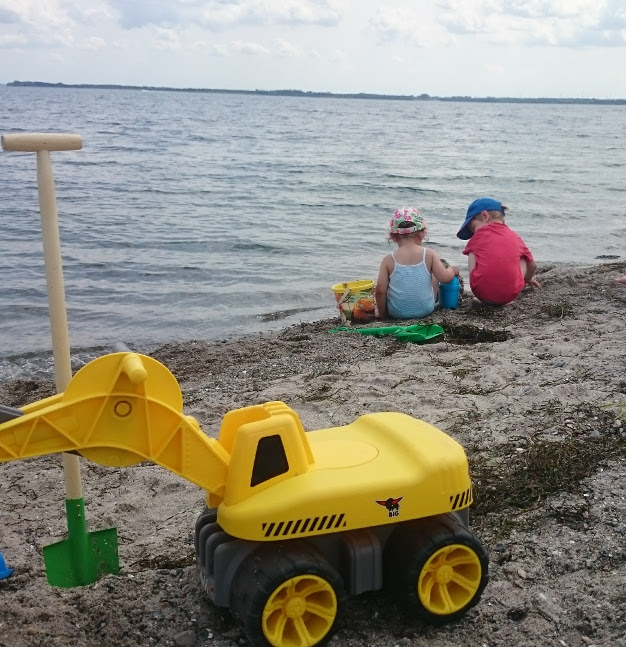 Wolflings playing at the beach

So, I picked some yarn from my stash: Daria, a really soft cotton cable. In a bright greenish-yellow color. I had bought it last year, intending to knit the Petrie shell with it – and that is even what I cast on for. I got perfect stitch gauge on my first (and only) swatch – which is plainly amazing. But my row gauge is way off – that is a lot less surprising. I don’t know of a single knitter who ever got stitch AND row gauge. I may have to fiddle some with the rows and directions further on with the project but so far it’s just straight knitting. As per usual, I cast on using the Long Tail method taking yarn from both ends of the ball. (Usually, I am pretty good at guesstimating tail length but went the less stressful route this time.) And then I packed it up.

I packed very few tools: scissors, darning needle, tape measure, pencil, an old row counter and a few stitch markers. The needles had the project already on them and casting on before hand was a good idea. I don’t think that is as easy to do while in the car, talking to the wolflings to keep them entertained. I had the pattern printed out – taking the tablet out to look at it is not a good idea when the wolflings are around. And I made notes on the gauge and possible modifications I might have to try. 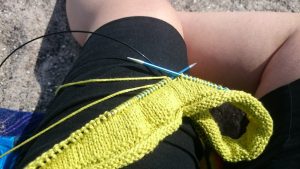 Knitting at the beach

The yarn is easy to knit with and very soft. It glides well over my fingers and doesn’t split. That made it a good choice for traveling and the beach. Sea water can make your fingers a bit sticky and knitting while driving over bad roads (we had to take an alternative route that apparently was mostly used by bicycles and tractors) isn’t all that easy. The color was also a good choice (I’ve discussed color choice before), not too dark and not too bright.

The project was easy enough. I only had to knit straight and didn’t have to watch my hands or my knitting at all. I could look out the window or watch the wolflings and I didn’t have to concentrate on the knitting. The project and the yarn I took along didn’t take up too much space, it all fit neatly into my project bag (forgot to take a picture of that, though).

What could have been better 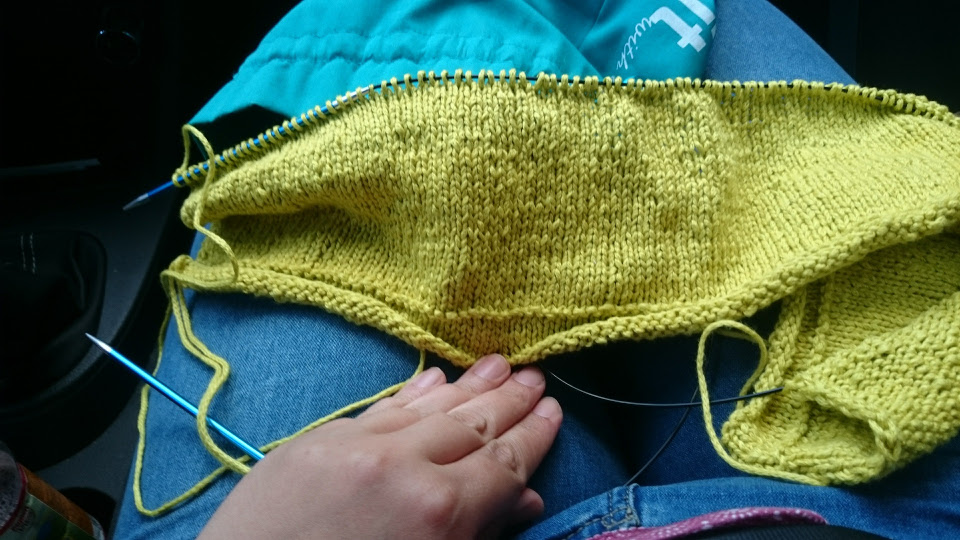 Knitting on the way back. Didn’t get that much done as you can see.

There isn’t much to say here, really. There was only one problem. I had packed way too much yarn. I warned you about that in a previous post and fell for the same problem. This here knitter packed like six or seven balls of yarn and only needed two. I didn’t get around to knitting as much as I thought. Spent too much time playing with the kids, filling watering cans for Tiny Wolf, looking for crabs (we actually saw some!) and playing with them in the pool. Or walking around the small marina looking for jellyfish (there hardly were any this year, Little Wolf was very disappointed), looking at the swallows and sea gulls flying overhead. Or playing with them on the playground and in the pool.

Maybe when the wolflings get bigger there will be more time for knitting on vacation. But I did get to knit some and didn’t have to go cold turkey for a week. And we did have a lot of fun and that is all that counts really. 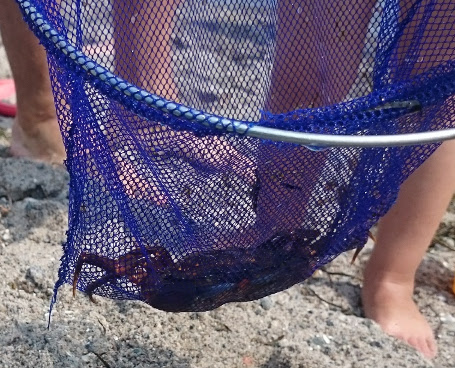 We saw an actual real life crab! The Wolflings were excited.

So were you on vacation or are you still going? What are you knitting this summer? Were there any problems you couldn’t fix on the go? Please, let me know in the comments below.

I am trying to get back into a nice writing schedule again. I don’t know what the next post will be about yet but I have a few post ideas for the foreseeable future. I’ll likely show you how my steeking adventure goes when I get to the cutting part – which will be soon.