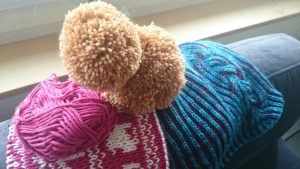 I didn’t get a whole lot of knitting done in the past two weeks. Too much to do in my “free time” that didn’t pair well with knitting. Like laundry, birthday party planning (my son will turn 4 soon and I had to make a couple of invitations that looked like Lego bricks…), going to the playground with the kids and such. And of course, there was the daylight savings time debacle…Getting jet lagged twice a year is hard enough for us big people. But even if it seems okay at first, it’s much harder on (small) kids. They slept an hour less because somehow they still woke up at the same time in the morning. By the end of the day, they had exhausted themselves. And the more tired my kids are the longer it takes to get them to bed. 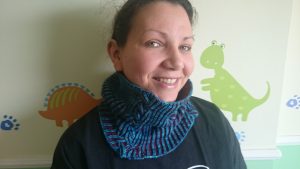 Knit brioche cowl on me

I did manage to finish my cowl, though. And as soon as the weather realizes it’s about to be April, I may even get to wear it. Currently, it is just too warm almost like early summer already. I really liked knitting that cowl and I think it looks very pretty. I should try two yarn with a higher contrast on the next brioche project (I’m sure there will be a next one) to make it pop more. Brioche knitting isn’t as hard as I thought, not even when you’re adding cables to it. And there are so many beautiful brioche patterns out there on Ravelry, I want to knit more… And maybe make one of my own some day. 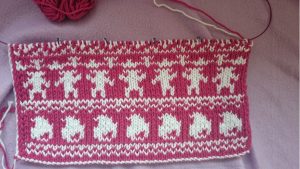 I haven’t finished the second clue of my Yarnia Grand Quest Blanket, yet. I had wanted to finish the cowl before starting it. Hopefully, I can finish by Monday or I’ll fall too far behind. The third clue is going to come out some time tonight. I still have a lot of fun with the blanket. There is a lot of variety in the patterns I get to knit and it’s fun not knowing what I will get to knit next because I need to make a die roll first. I got to use my strength modifier for a battle die roll now and the story is also engaging in its own way. Can’t wait to continue it.

I have also started a little bunny made (almost) entirely of pompoms. I used to do a lot of pompoms when I was a kid but that’s a long time ago. It’s fiddly and not as much fun as knitting for me. For me sewing the pompoms together is a bit annoying, actually. I’m not the biggest fan of sewing by hand even in such small ways. But the end result is cute and I hope mine will be, too, when it’s done. So far I have a head and body and now I need to make five small pompoms and attach them for feet and tail and then cut ears out of felt and stitch the face… And I want to finish it before it’s Easter. I wish there were more hours in the day. 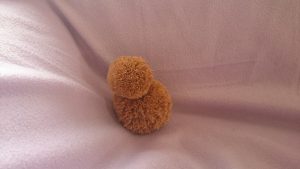 Pompom bunny to be

I haven’t started Papa Wolf’s socks, yet. See above as to why. Too little time, too much to do with it. The pattern is sketched out but I need to make a swatch or two to test it out and fiddle with it and I haven’t gotten around to that yet. Hopefully, they won’t become a Christmas present…

What are you currently knitting? And what’s eating away your knitting time? Please, let me know in the comments below.

Next time on this very blog I will show you my knitting needle collection and tell you about my favorites.

3 knitting techniques to try out this year