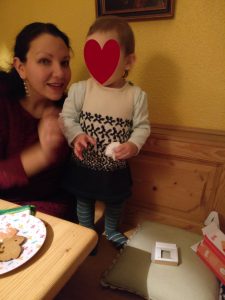 Tiny Wolf in Lovely Rita – taken before the cocoa incident

For last Christmas, I knit my daughter a dress. That’s Lovely Rita by Martina Behm. (She looks absolutely adorable in it and I think I will knit it again in a larger size when she’s grown out of it.) Her grandma gave her and Little Wolf some cocoa to drink. My then 17-month-old daughter had unfortunately already removed her bib and had absolutely refused to let us put it back on while she drank. So, of course, she spilled half the cocoa over her pretty dress. I hadn’t been able to wash out the dress that evening (Christmas is exhausting with 1.5-year-old and a not quite 4-year-old) and by the next day the stain had already set in. Thus began my adventures in stain removal.

I had tried to wash it in the washing machine in the wool program. That removed some but not nearly all of the stain. I tried that again and this time the stains didn’t get better at all. I had tried hand washing it in the sink, gently working soap into the stain. That also had no visible effect on the stain. I even tried a commercial stain remover that I would normally never use on woolen things in fear it might damage it. Again, no effect. I tried laying out in the admittedly weak winter sunlight because I had read somewhere that sunlight can help remove stains as well. That didn’t help either.

Unfortunately, I don’t have a good before picture of the stain. It refused to let itself be photographed properly.  Otherwise, I’d show it to you here. Just imagine brownish stain on the off-white part of the dress, where normally a bib would be during meals…

So, I started searching the internet for tips on how to do this. It took me a while to find something that could work on wool and wouldn’t possibly destroy it. They said to use a mixture of cold water, egg yolk, and glycerol. Here is a link to that page; it is in German, though. 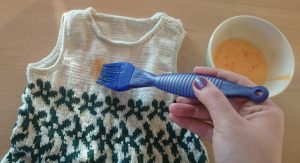 One short trip to the apothecary later I had all the needed ingredients and set to work. At first, I tried it with an about even mix of water and glycerol and an egg yolk. I applied the mix to the stain, gently working it in with a dish towel and then waited an hour, as the instructions had said, before rinsing it out by hand and letting it dry. That did help some but didn’t remove the stain entirely. I did it all again with only minimal effect. For the third try I added a bit more glycerin to the mix and that seemed to do the trick. Now there is only a small and light discoloring remaining that no one but me can see apparently.

I’ve recently found another good post with a lot of good care instructions for woolen things on the A-C Knitwear blog. They themselves link to a very useful list on stain removal from woolen things, sorted by stain type. There they advise using white spirit and white vinegar on a milk and/or chocolate stain. I haven’t tried that but I don’t know if I would either. White spirit is a lot harsher than glycerol and also has a low level of toxicity to it (link here). It can damage and/or irritate your skin and the fumes aren’t really good for breathing either. I personally would rather use the gentler non-toxic method first and only if it doesn’t work, use the other.

What were the most interesting you ever had to get out of your woolen things? Which were the hardest to remove? Please let me know, in the comments below.

Next time on this very blog, I’ll give you a little update on my knitting projects. And if I manage to get it started, I’ll also show you the first bit of work on the sock pattern I’m trying to design for Papa Wolf.

How to Steek for the Absolute Beginner

Everything You Need to Know About Provisional Cast Ons

1 thought on “Adventures in stain removal”