So you’ve picked out a pretty cowl or something else and have the yarn, knit a swatch and prepared the pattern. But now you have a new problem: It’s a sideways construction, you start at the center and you knit outwards toward the edges, or you’ll knit on a nice edging later. It requires a provisional cast on. Don’t worry, I’ve got you covered. Read on for four different provisional cast ons!

Provisional Cast On Around Waste Yarn

Provisional cast on around waste yarn.

You can do a provisional cast on around waste yarn. It’s one of the quickest ways out there, and it’s not very difficult to do. And if you’ve chosen the right waste yarn there is no unpicking to do at all. You can just pull the waste yarn right out. You should put the held stitches on a circular needle first, though. Otherwise, you might be in a load of trouble when you lose a few stitches.

Here I have already picked up the held stitches. I can just pull out the waste yarn now.

However, you don’t even need to use waste yarn. You could just as well just cast on around the cable of a circular needle instead. That way, no stitches can get lost and won’t have to weave the needle through all the stitches later. But make sure to use a circular needle of the same needle size as on the rest of the project. Or at the very least mark the difference because you will have to use a different needle to knit with later if you aren’t just grafting the stitches together. 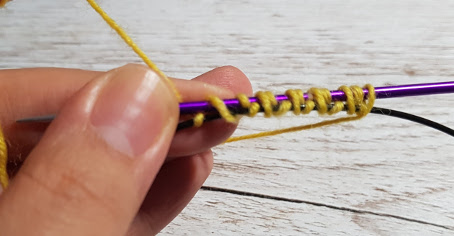 Provisional cast on around the cable of a spare circular needle

Chained provisional cast on after a few rows of knitting

This provisional cast requires a crochet hook and some waste yarn again. Take the waste yarn and do a chained or crochet cast on. Then work those stitches with your working yarn – this is your first row of the pattern.

It’s easy to do, but you should have a crochet hook of similar size than your knitting needles, and your waste yarn should also be close in thickness to your working yarn. If it’s too thick, it’s harder to pull out again later. You don’t need to obtain exact stitch gauge with the crochet hook because you won’t be using that crocheted row later on. But I would remain relatively close or use a thinner yarn, just to be on the safe side and make it less unwieldy to work with. 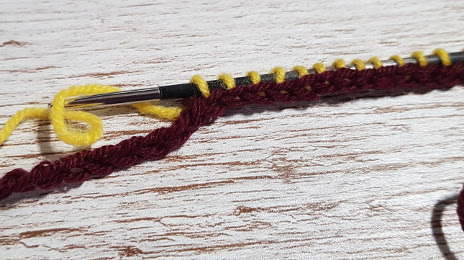 This cast on also needs a crochet hook. This time you need to do a chain a few stitches longer than how many you need to cast on later. Then you turn it around and knit into the back of it. Again this count’s as your first row.

I often use waste yarn a bit thinner than my working yarn and a crochet hook that is about as thick as my chosen needle size for this. And I crochet the chain quite loosely. I find it easier to unpick that way later.

Mark the end of the chain to unpick it later. I find it a lot easier to do from that side because you can just rip the chain back. Again it’s simplest and quickest if you were able to put the held stitches on a knitting needle first.

Judy’s Magic Cast On As Provisional Cast On 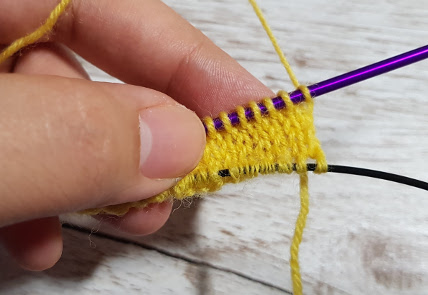 Provisional cast on using Judy’s Magic Cast On. I have already knit a few rows.

I didn’t know about this until recently. You can use Judy’s Magic Cast On as well. I had only ever used it for socks, but if you think about it, it’s pretty apparent that it would work just as well as a provisional cast on. I’ve first thought about this when I did that post about stretchy cast ons. The tubular cast on included in that post used Judy’s Cast On in the same way.

You do Judy’s Magic Cast On as you always do but over two circular needles. Be sure to cast on twice as many stitches as you need, so you have the correct number on each needle. Then only work the stitches of one needle, until it’s time to use the held stitches.

This cast on requires no waste yarn, and you don’t have to unpick anything. You should, however, have a spare circular needle of the correct size lying around. And the held stitches appear twisted. You will have to change their orientation or knit into the back of those stitches for one round when you need to work with them.

Which cast on you choose is entirely up to you and your preferences. They all create (almost) the same result. There is only one difference: The first three methods form stitches from the loops between your original stitches. That means everything on the other end will be offset by half a stitch. That won’t be noticeable on stockinette, garter or ribbing. And when you graft the stitches, or you were just holding them for a hem it’s also not important.

But with more intricate patterns (color, lace, cables) you will have to work around it. Most designers add a block of a different stitch in the center if you knit down from both sides of the provisional cast. So, keep that in mind when designing a pattern using a provisional cast on.

Now if you use Judy’s Magic Cast On on the other hand creates two rows of stockinette around the cast on. Again you will have to work around that when designing a pattern. Most patterns are written with one of the other provisional cast ons in mind, so you may have to make a swatch to see if it’ll work for you.

Always use slippery yarn when you do a waste yarn cast on. Never use wool that felts. It will only make it harder to unpick later. Also, no fuzzy yarns. They just make it much harder to see the stitches. I usually use yarn a bit thinner or of the same weight. I find that makes it easier to unpick later. With the cast on around the waste yarn, it may, however, create problems if your waste yarn is too thin. That gives you less to work with when you are picking up those held stitches. You could likely work around it by using a slightly larger needle to cast on with. But I would test it first with a small swatch just to be on the safe side. Or put the held stitches on a circular needle early on, when it’s not as painful when it doesn’t fit. The easiest way around this is to indeed cast on around a spare circular needle instead of waste yarn.

Pulling out the waste yarn of a chained provisional cast on

Also, you might run into problems with your stitch count when casting on with waste yarn. It can sometimes be quite hard to see the last stitch as it will usually be placed after the last original stitch (remember they are offset by half a stitch) and not even look like a regular stitch at all. I know I’ve had that problem before. So count your stitches thoroughly.

I am currently going through my stash. Organizing it, cataloging it. Picking out what I don’t like anymore. It’s incredible how much you can collect over ten years. I’m planning a post on stashes, especially mine, next. So come back soon to read it! 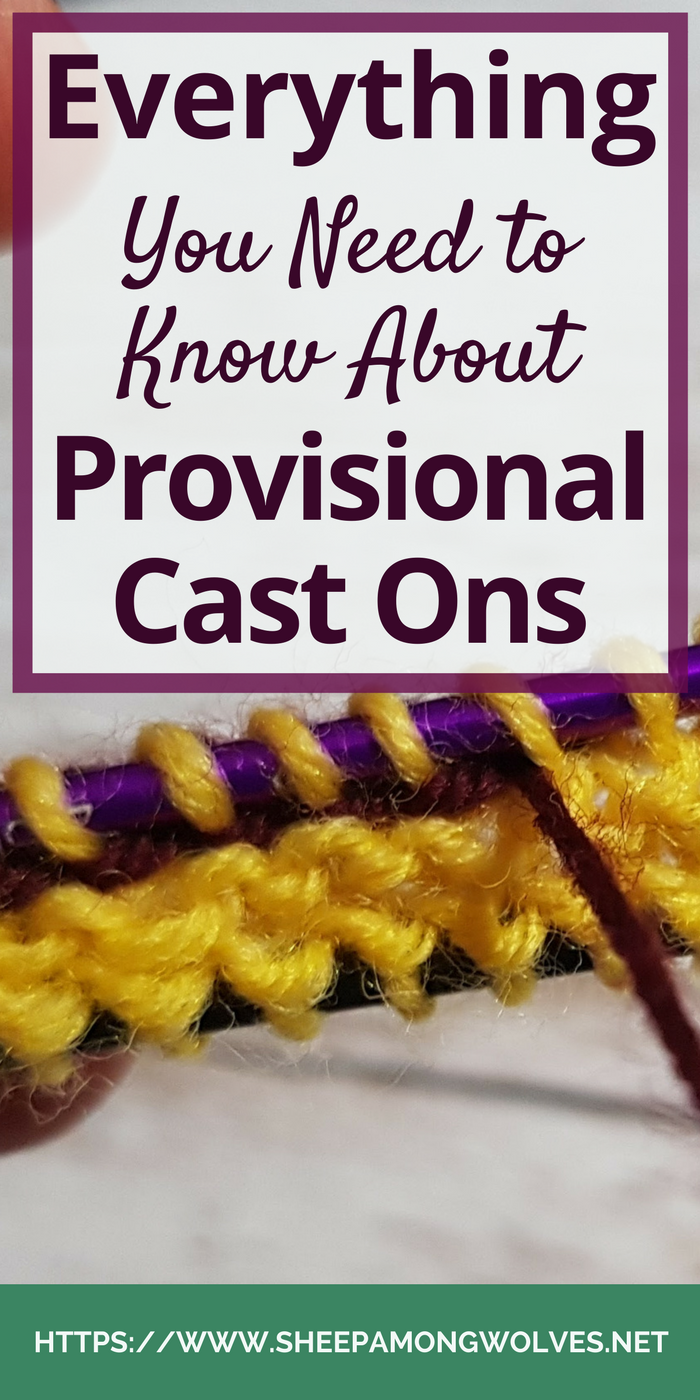 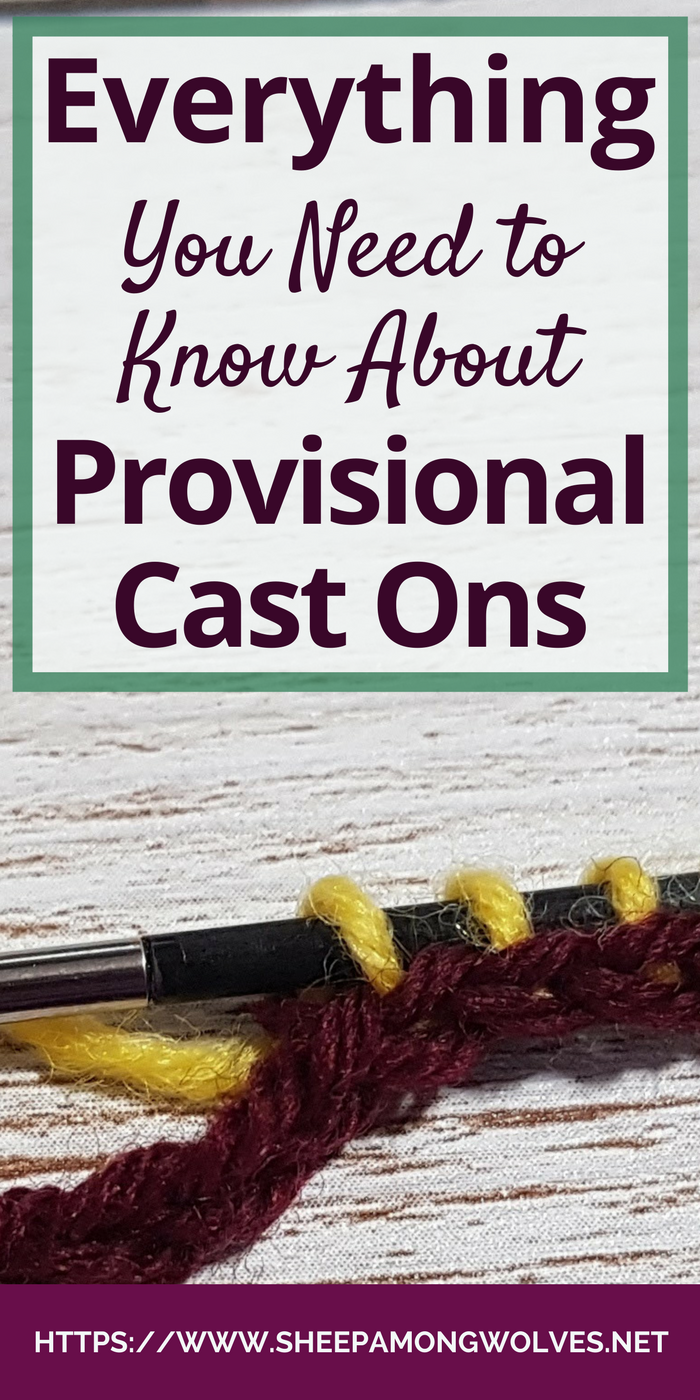