Today I wanted to tell you about four German IYS (Internet Yarn Stores) I like. These are just four of many. My birthday was just yesterday and it’s easiest to counter the obligatory “What do you want?” questions with a wish list. My in-laws don’t like to order off of Amazon wish lists (don’t ask me why). So I picked out four shops with gift coupons for my in-laws to choose from. I could have added many more German based indy dyers to the list but my in-laws aren’t really internet savvy. I didn’t want to make them use Dawanda or Etsy; those portals are harder to navigate than small shops are. 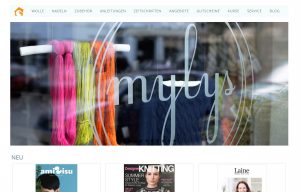 Yes, I am aware that Wollmeise is a German brand but you still don’t see it in stores all that often. Most stores I have been to didn’t carry any kind of hand-dyed or “indy” yarn. I am not sure if you can still call Rohrspatz & Wollmeise “indy” actually. But their yarns aren’t mass produced like Regia or Opal for example. We natives of Hamburg would say “das ist ein ganz anderer Schnack”, meaning “it’s a different thing, entirely”.

Anyway, I am especially excited about them now carrying Hedgehog Fibres. I’ve been drooling over those yarns for a big long time and that’s a really good opportunity to try some out. Or even see it in person, if I were to take Papa Wolf and the wolflings along and have them sit in the café belonging to the store and eat something sweet and unhealthy while I go drool over and fondle some yarn… A piece of cake might buy me 20 minutes of shopping time. 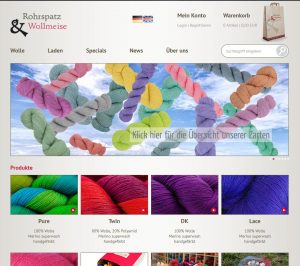 I believe everyone who might come here and read this has heard of Wollmeise yarns before. They have become so popular and for good reason, I think. I love the colors. They are so vibrant and there are tons of different colorways. I’ve so far only tried their fingering weight yarn – that’s what my stash mostly consists of – both “Pure” and “Twin“. You always get 150g instead of the typical 100g skeins, so you have more than enough yarn even for very large feet. I am in love with the texture, feel and durability. Those yarns knit up wonderfully and you can make a lot of different things out of them. Papa Wolf has had a couple of pairs in Wollmeise now – including the last pair, that I still need to take decent pictures of. And Tiny Wolf wore a dress last Christmas made of Wollmeise (pattern is Lovely Rita).

I would like to visit their physical store one day even though that would be dangerous – I would likely end up spending a year’s worth of “yarn allowance” all at once. But since they are located on pretty much the opposite end of Germany that’s not quite as easy to do.

I will surely continue to buy Wollmeise yarn in the future. And I am planning another Lovely Rita made out of more Wollmeise yarn for Tiny Wolf for this Christmas. She’s long grown out of the last one. I have a feeling the next one will be white and some kind of pink. To the dismay of Papa Wolf, Tiny Wolf has developed a fondness for girly colors. 😉 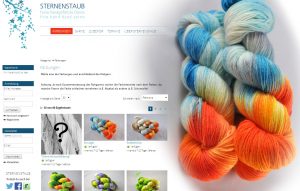 I came upon this shop only recently. I believe I had a picture of one of their colorways in my feed on Pinterest. And since I don’t get a lot of German hand-dyed yarn in my feed that was a nice surprise. They have a large variety of colorways and yarn bases. And they offer personalized colorways as well as a few project bags and similar things.And I always like to try new hand-dyed yarns. Actually, I’m collecting hand-dyed yarns. Which is a nice way of saying I’m addicted to them. I am planning on organizing my stash later this summer/early fall and will likely blog about it, so you’ll see what I mean.

I always like to try new hand-dyed yarns. Actually, I’m collecting hand-dyed yarns. Which is a nice way of saying I’m addicted to them. I am planning on organizing my stash later this summer/early fall and will likely blog about it, so you’ll see what I mean.

I haven’t ordered from them yet because I’ve been trying not to buy any yarn for the last 4-5 months. Kid’s birthdays are expensive after all. Since I had my own birthday coming up and they offered gift coupons I thought I would put them on my wish list. 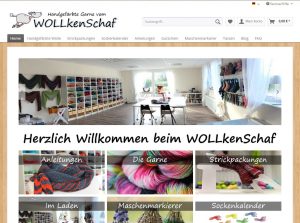 I first came into contact with Wollkenschaf yarn at the Hamburg Wollfest in 2014. And of course, I bought some. I bought a lot of yarn there. But that’s just what you do, isn’t it? They offer a large variety of yarn bases and colorways as well and I remember I really liked the yarn I had bought from them. Though I can’t recall which it was anymore. Like I said I bought a lot of yarn there and it’s been nearly three years. I remember I used it up on a project for someone who wasn’t me… And that’s it. I used to have really good memory once upon a time but that was before I had the wolflings.

They have a physical store as well but that’s too far for me to go to (40 minutes by car with good traffic) without taking the whole family along. And I shudder to think what the wolflings would do in the store. Especially Tiny Wolf just loves to, hmm… let’s say rearrange things. And you can’t tame her by picking her up because she’ll just struggle and scream until you let her drop or put her down again – whatever happens first. She loves her freedom. Without a playground very close by a visit to that store is not really possible.

The name “Wollkenschaf” is actually a clever play on words (I like such things). “Wolke” is the German word for cloud and “Wolle” means wool and the first half of the name is a mix of those two words. People often do that to add meaning to a word, here probably that the wool is as soft as a cloud. “Schaf” is simply sheep and therefore “Wollkenschaf” means something like a sheep with wool as soft as a cloud.

Have you ever tried any of these online shops? Or been to any of these stores? Which yarn would you like to try the most? Would you order from any of those shops even if you had to import it? Please let me know in the comments below.

I am not entirely certain what I’ll be writing about next. I will have to let inspiration strike me. Maybe something about vacation knitting. Our summer vacation will soon be coming up and I’m planning on taking some knitting along this time. With the wolflings a bit older now I might actually find some time to knit. 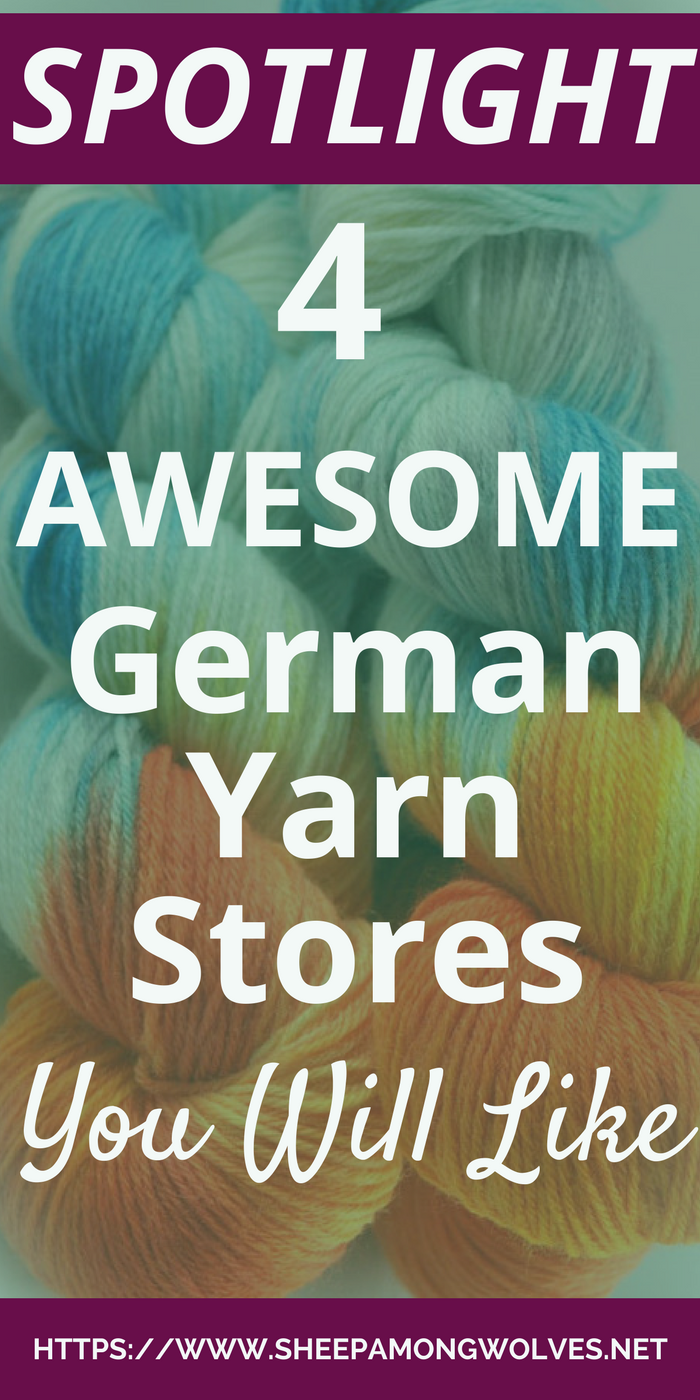 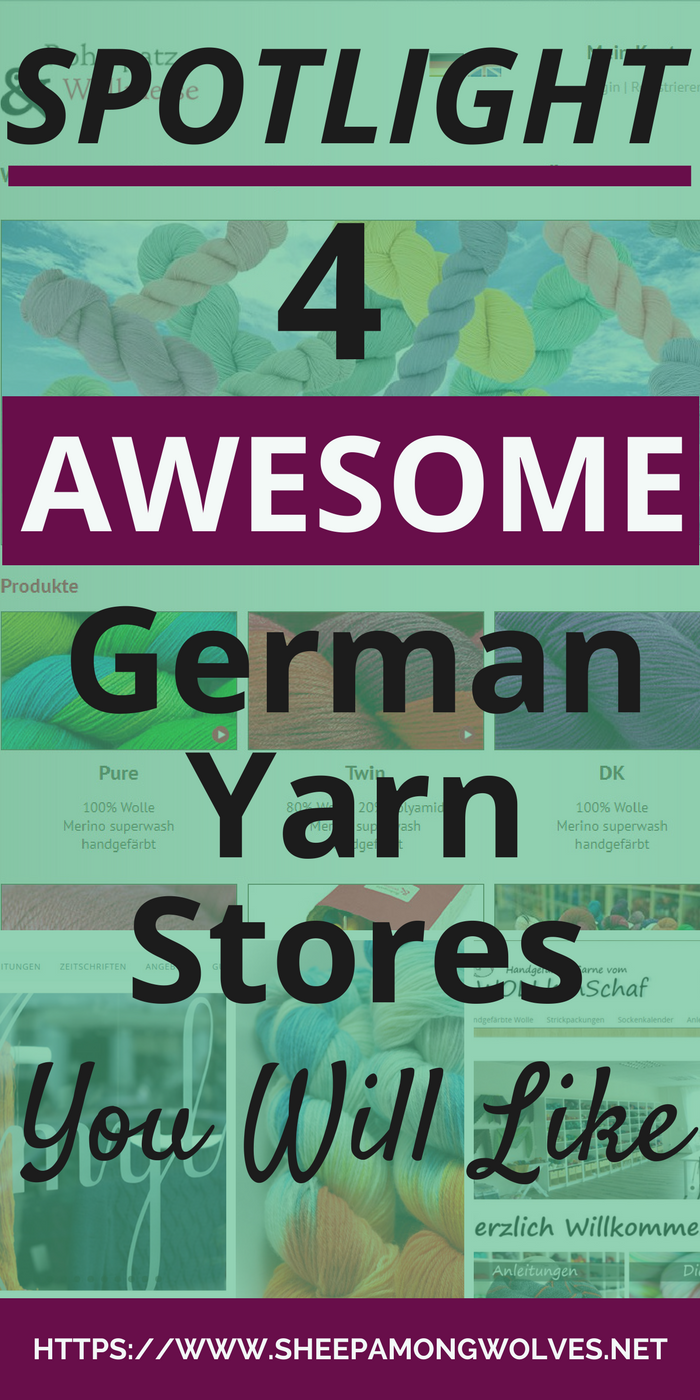 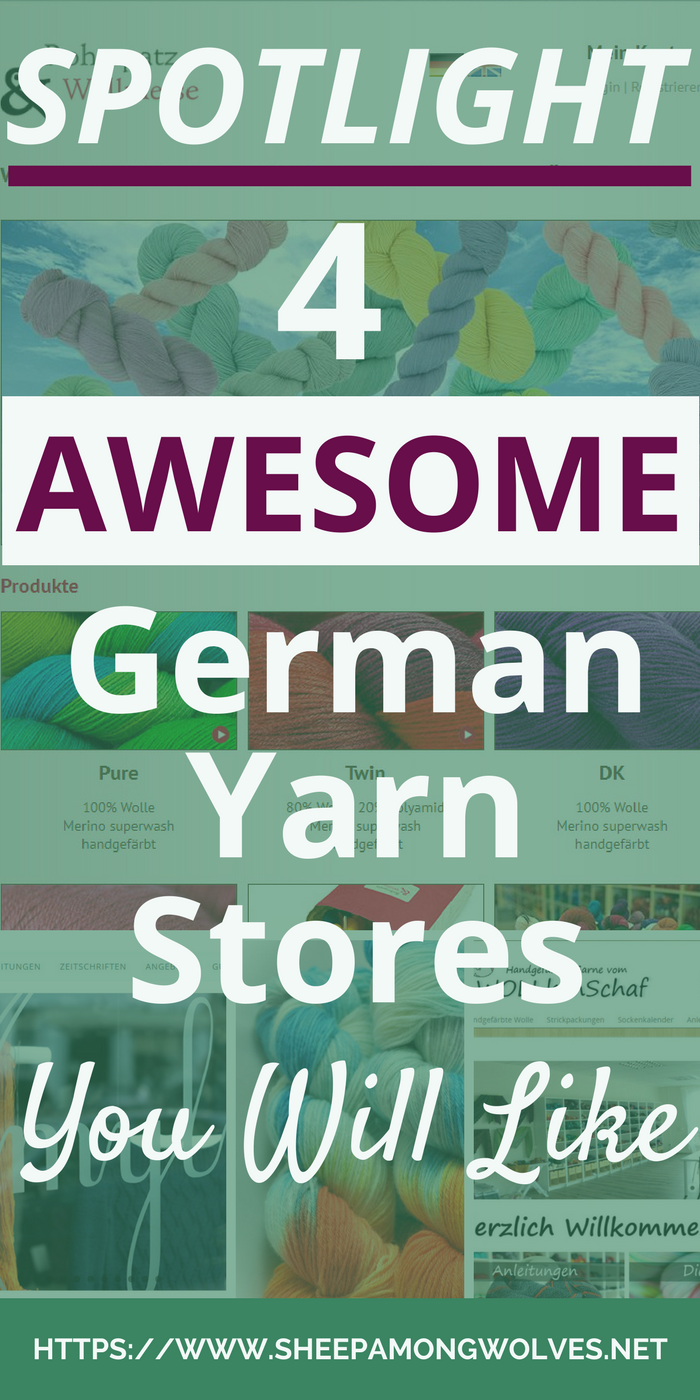 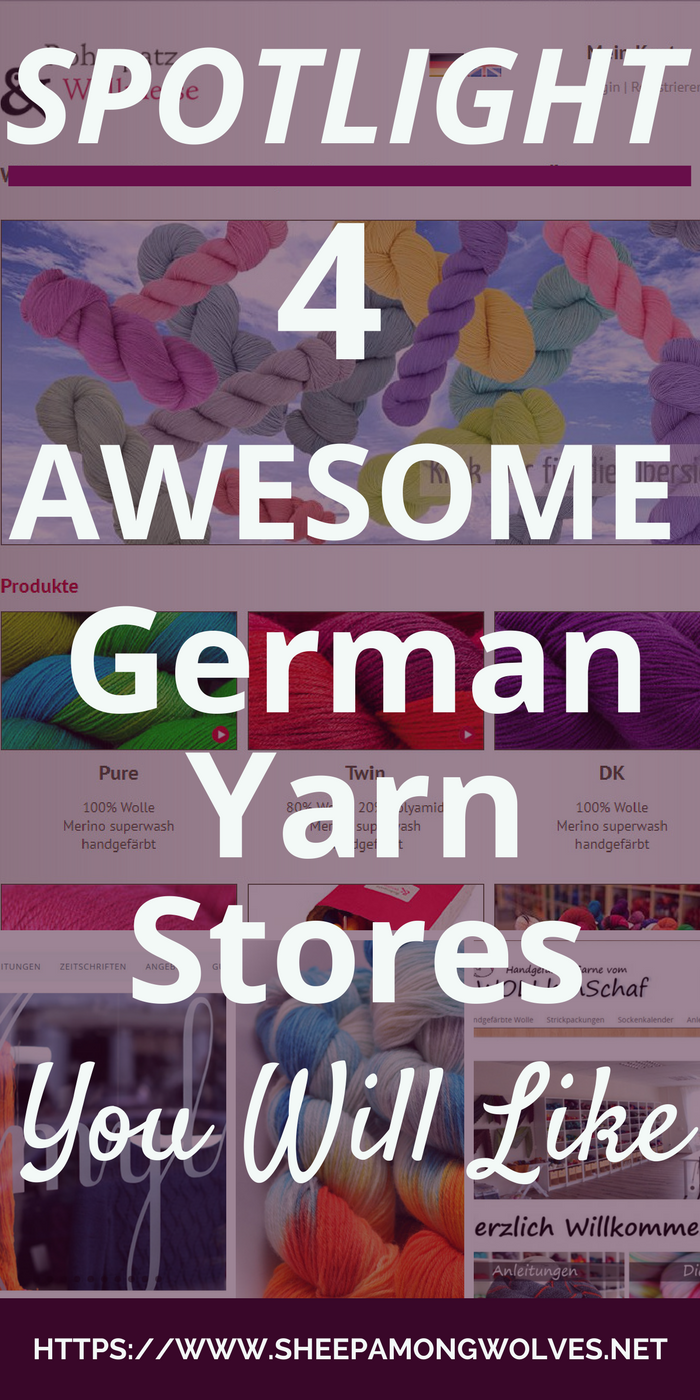 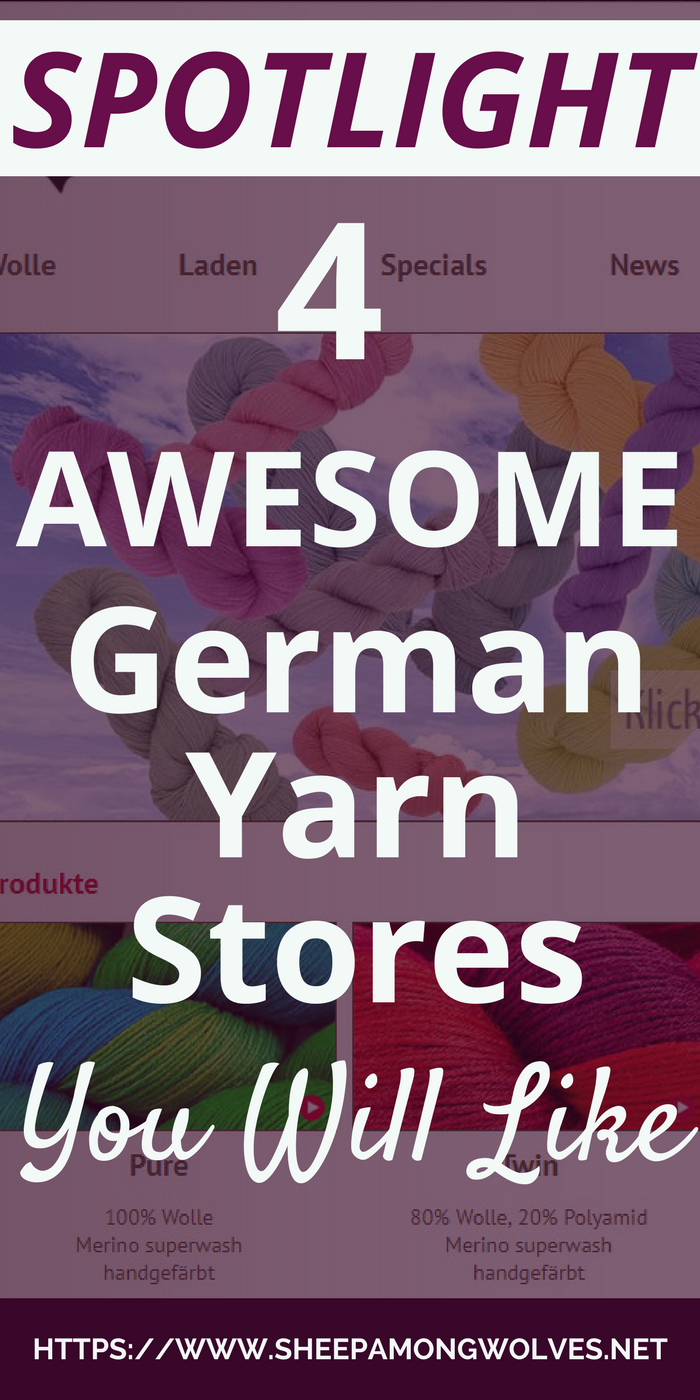 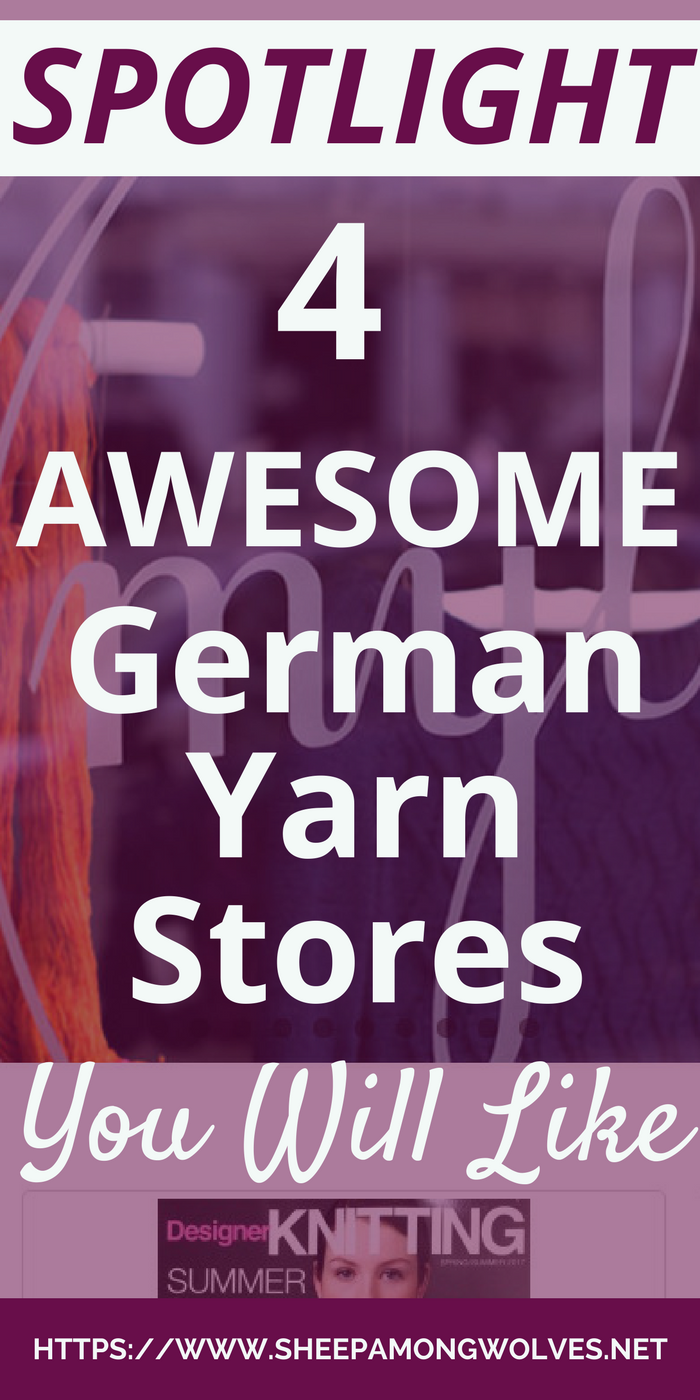 8 Great Things I Loved in January

13 Great Things I Loved in February

How to Avoid Problems with Your Travel Knitting

How to Know If You Are a Process vs Product Knitter