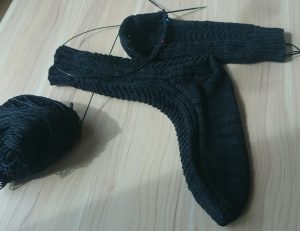 Just a short post this week. I’m sick – again – and don’t have much energy for anything.

I had wanted to show you the finished pair of Papa Wolf’s socks but… Well, I’m still not finished. It’s crazy how long it takes me to knit a pair of socks now. I used to knit them up in a couple of day to a week. I started designing these socks in April! Crazy, really. Okay, I’ve also been knitting on the blanket quest squares and doing everything else that I need to do but still. I have completely stopped knitting on the squares a little over a week ago because I finally wanted to finish those socks. And still, I haven’t managed it. Good news is: I only need to knit the gusset, foot, and toe of the second sock, so there is an end in sight. (Yes, I know that’s still half the sock.)

If I hadn’t gotten sick the socks might be done now. But when I have a fever and a splitting headache I just can’t knit anymore. Can’t even hold the needles. It’s just too exhausting. Which is a shame because that’s a whole lot of time I spend on being sick. I never have that much “free” time where I don’t have to take care of the kids, don’t have to do anything in the house and don’t have to work. It would be really nice if I could use it for knitting.

I’ve also started the pattern. With the first sock done the pattern was finalized and I could start it, finally. I hope to finish it by next Friday. I will need to wait for nice sunny weather to take pictures when Papa Wolf is around. Once both socks are done. The pattern itself, however, I should be able to write up by next week. I hope. Unless more unforeseen things happen. Like one of the wolflings getting sick.

I will be needing a test knitter or two by then. So, if you’d like to help out with that comment on the post or drop me a line via the contact form here – or find me on Twitter or Ravelry. I would really appreciate the help.

And now to distract you from how little content there was this week: Here is a picture of the wolflings, after Tiny Wolf and Little Wolf dug a whole, Little Wolf climbed in and they closed the hole again… They love doing that for some reason. 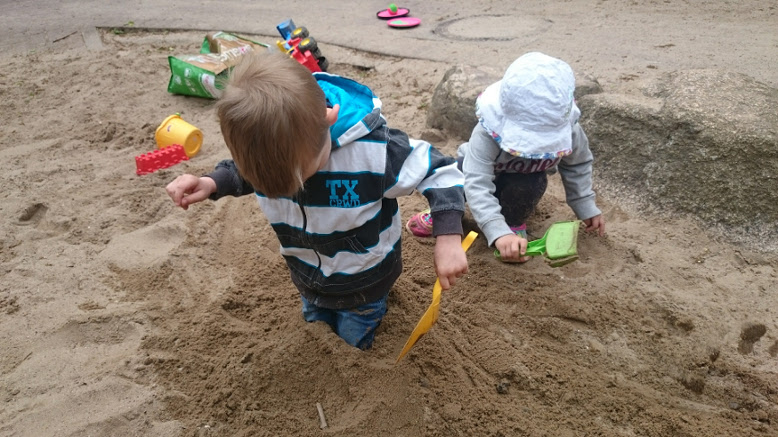 What have you been up to? How are you doing? Do you still knit a lot when you’re sick? Would you like to see more updates here? What kind of content would you like more of? Please, let me know in the comments below.

This is it for this week. Like I said: short post. Hopefully, by next week, I’ll be back to normal.

Mistakes I Still Make After 10 Years of Knitting