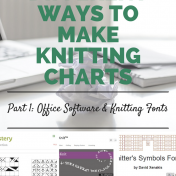 As I’ve told you before, I am currently knitting up the socks I have designed. It’s slow going because the yarn is quite black and I mostly knit in the late evening when it’s dark. But I want to write up the pattern as I go along to post it on Ravelry at a later time as a free… Read more » 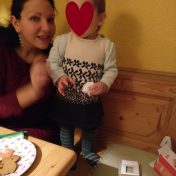 For last Christmas, I knit my daughter a dress. That’s Lovely Rita by Martina Behm. (She looks absolutely adorable in it and I think I will knit it again in a larger size when she’s grown out of it.) Her grandma gave her and Little Wolf some cocoa to drink. My then 17-month-old daughter had unfortunately already removed her bib and… Read more » 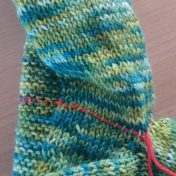 As I had mentioned in my previous post, I had to fix one of the sleeves on Tiny Wolf’s Flax Light sweater. Apparently, no pattern is so easy that I wouldn’t be able to mess it up somehow. This is the first time I’ve fixed a sleeve like this, so I wanted to write myself a little “knitting how to”… Read more »