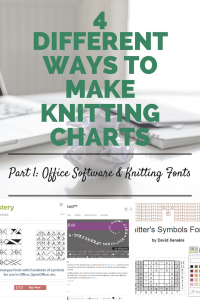 As I’ve told you before, I am currently knitting up the socks I have designed. It’s slow going because the yarn is quite black and I mostly knit in the late evening when it’s dark. But I want to write up the pattern as I go along to post it on Ravelry at a later time as a free pattern. I want to put a chart alongside written instructions in the pattern and so had to do some research on how that could possibly be done. I ended up with quite a bit of information and decided to write up a series about it for the blog. So here is the first part of the series on how to make knitting charts on your computer.

Many people enjoy using Excel or a similar software (like OpenOffice which I’ve used for years) for doing this. It’s not as comfortable as using a charting software would be, but it won’t cost you much – or even anything at all, depending on the stitch pattern’s level of complexity.

It can be done entirely without a knitting font for simple cables, simple lace, more complex lace and colorwork. 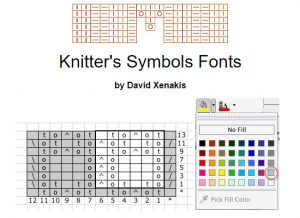 Knitter’s Symbols Fonts – pictures taken from screenshot of the website

If you want to install a knitting font you can do even more complex patterns. There are a couple of knitting fonts out there. I’ve found two free ones: Knitter’s Symbol fonts by Knitter’s Magazine and Kauri’s Knitting Font. Of these two only the Knitter’s Symbol Font can be used for commercial patterns. Kauri’s Knitting Font can only be used for free patterns (they allow use for Knitty patterns for example). 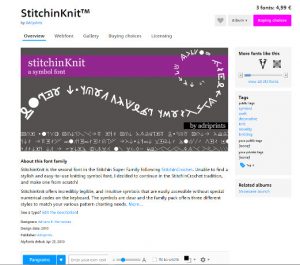 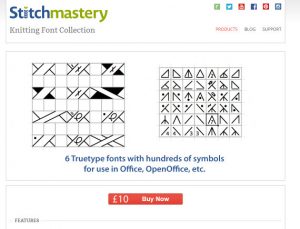 There are numerous videos on Youtube on how to use Excel or a similar Program and a knitting font to make a chart; here are a few:

It is also possible to make charts in image manipulation programs like Photoshop or Illustrator. I’m not very good at using such software myself. On Marnie Maclean Designs you can find a number of tutorials on how to do that, however.

Do you know of any other fonts for knitters? Or know other good resources for making knitting charts? Was this helpful to you? Please, let me know in the comments below.

Next week in part two of this series I’ll tell you about what tools you can use to make charts from within the comfortable confines of your browser.

Ultimate Knitting Needle Guide: What Is the Right Needle for You?

Ultimate Knitting Needle Guide: the Best Material for You