You sock knitters out there know this: Sooner or later you’ll wear right through even your most robust socks. Sometimes it can happen quite suddenly because you snagged on something. Other times it’s a more gradual process; this often happens to your most beloved pairs first because you wear them so much. Other culprits are of course the dreaded moths.

But this doesn’t have to be the end of your loved hand knit socks! You can fix them. And same goes for any other piece of knit clothing. I recently patched up one of Tiny Wolf’s cardigans. She may be a girl, but she loves to play wild and rough, so holes and mysterious stains that are hard to get out again are a common theme in this sheep’s home. (She has a big brother so double that.)

So How Do You Fix Holes in Knitting?

Many of us may remember darning eggs from their childhood. Ours looked like a well known poisonous mushroom. (A quick google search tells me that it’s apparently called “fly agaric” in English.) I remember I used to help my mother darning store-bought socks. I found it fun to do back then. What I didn’t know then is that there are many ways to do patch up those holes.

First of though: Always keep in mind, it’s easier to reinforce thinned out fabric that has not yet become a hole. So always try to catch it before the fabric breaks if you can. And before you throw out your old darning eggs: They can still come in handy even if you are not using the traditional method. Especially when patching up socks, they can free up your hand that would otherwise have been busy keeping the fabric taut. 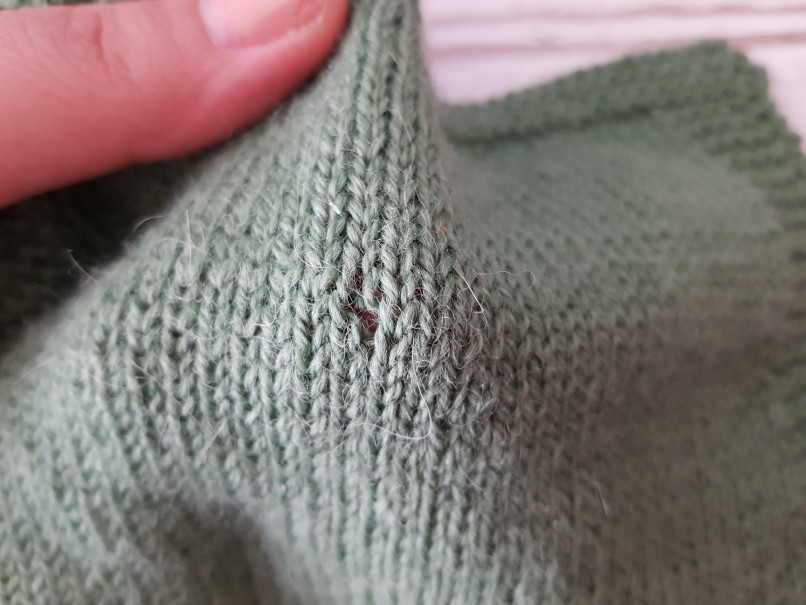 “Moth” hole. This can be fixed with swiss darning.

As I just said it’s best to patch the fabric up before it becomes a hole. The easiest way to do that is by duplicate stitching generously over the thinned out piece. Start in a place that still looks strong and then just over the thinner fabric – always anchoring in stable, healthy stitches – until you’ve reached the other side. If you can use the original yarn, it will be as invisible as any patch can be. Plus, you don’t have any ends to weave in because as you may remember duplicate stitching on the front of the work is one of the techniques you can use to weave in ends as well.

Duplicate stitch is probably the most seamless way of repairing knitting, and it likely creates the thinnest possible fabric while being just as durable as regular knitting. However, you can only use it on thinned out material or over tiny moth holes where no stitches have been lost yet.

These videos contain a lot of useful information on this technique as well but are sadly a bit blurry and unsteady: Sock Darning – Swiss Darning, part 1 and part 2. 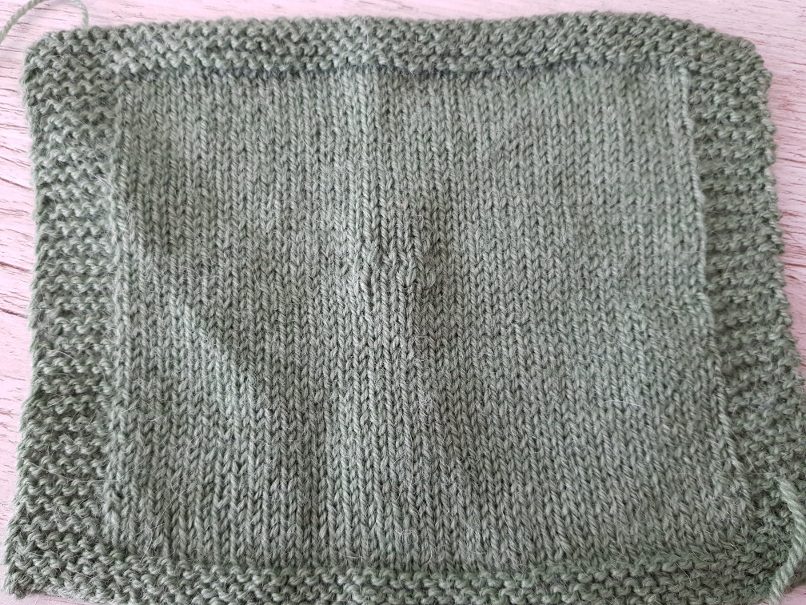 Swiss darned “moth” hole done with the original yarn. After washing it will be even less visible. 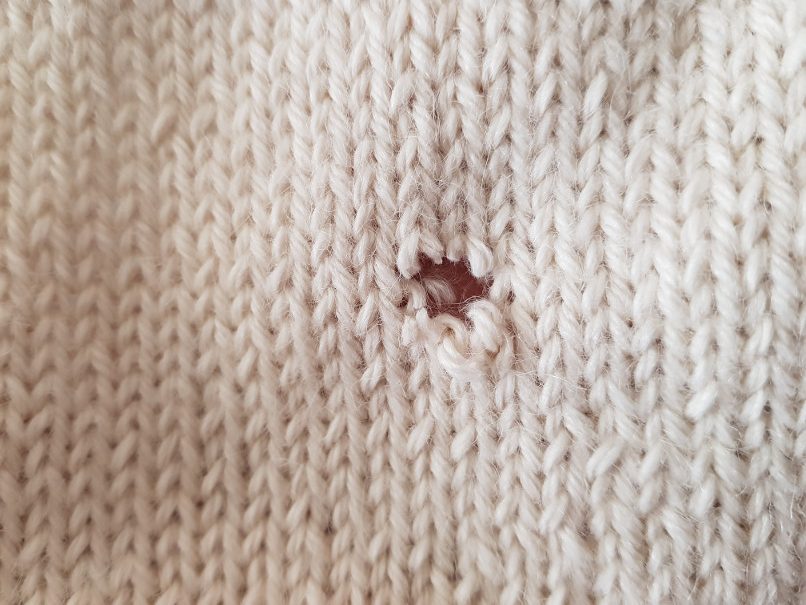 This hole is too large to use swiss darning.

This is what most of us will have in mind when we think of repairing knitting. The good old woven patch over the hole. As long as you are anchoring it in stable stitches, it will last quite long. I’ve darned many socks in my childhood, and I never had to darn the same hole twice. It’s easy to learn and quite quick to do as well.

The created fabric is, however, thicker and stiffer than knitting and usually sits on top of a bit of frayed out knitting, so expect a bit extra bulk. On top of that, it is definitely visible even if you use the original yarn. But that doesn’t have to be bad. It can give your old cardigan a new look if you patch up the elbows that way; especially if you decide to use a contrasting yarn instead.

It’s also one of the best methods for fixing up workhorse socks. Regular plain knit socks that you (or your loved ones) wear in heavy work boots, garden shoes, or rain boots, for example. These can use extra durability – and the places where you’ve worn a hole through them before are in need of this anyway. Those shoes tend to be a bit wider and more comfortable, so you won’t run into problems with it suddenly being too tight or uncomfortable either. On top of that, you likely won’t mind the patches as much as these socks tend to be plain and just worn for comfort, anyway. 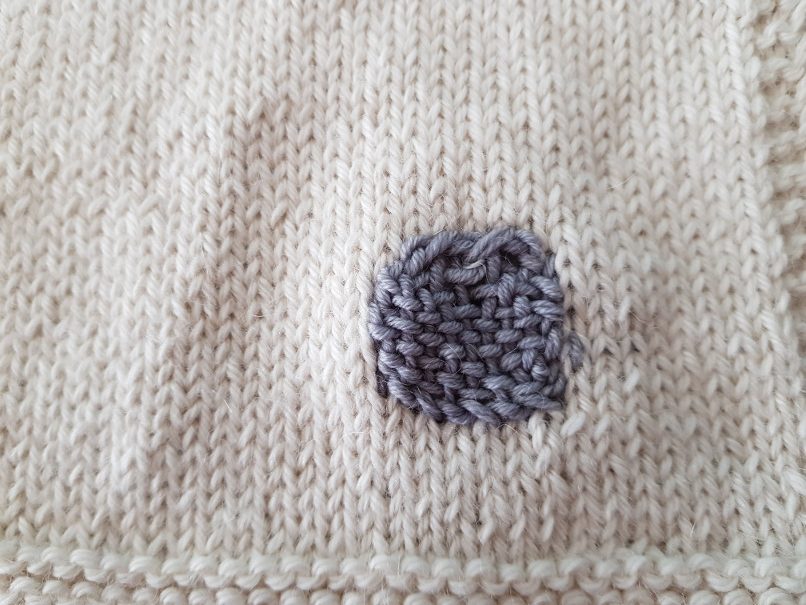 Darned hole. Visible but durable. Please excuse the messy top. I didn’t have a darning egg handy. The beginning would have been easier with one because the fabric is still unstable.

The last way (I know of) is to use a knitted patch. There are several ways to do as well, and I will cover them below. The knitted patch is an excellent method for (larger) holes in more prominent places even. It is not entirely invisible, but it doesn’t stand out as much. Especially if you still have some original yarn left. And since you are knitting a patch, the new fabric will have the same characteristics as the previous one. You could even try to use whatever stitch pattern was used in the original knitting, though that will be easier to do with simpler stitch patterns.

It will of course still be a bit thicker than before. You will have a second layer of fabric covering everything. But to me at least it still feels better than the patch created by darning. 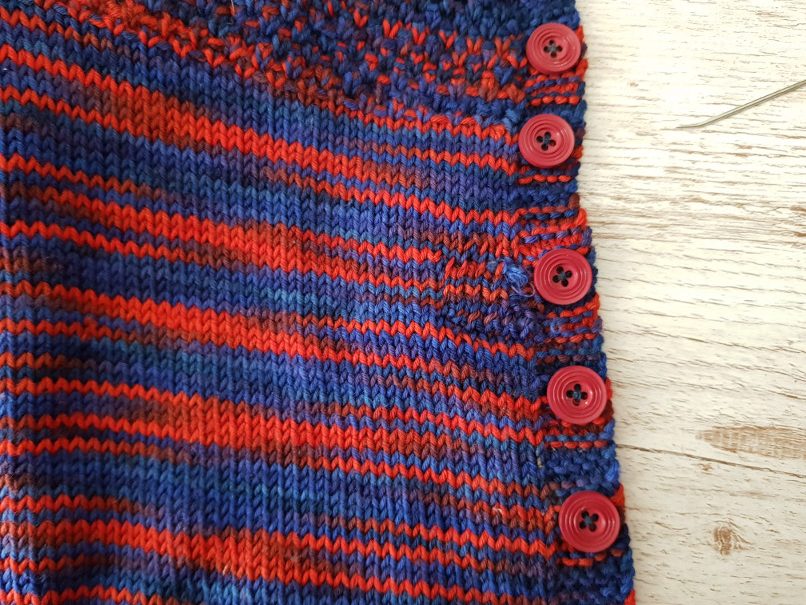 Knitted patch on the front of a cardigan. In solid yarn it would blend in more but even like this it looks pretty neat. The fuzzy bit is a bit of frayed yarn that itself to the front. But I can push it back in before this goes off to be washed.

You pick up and knit the last healthy stitches below the hole and as always make it a bit wider than the piece you need to repair as well. All patches need to be rooted in steady stitches to be durable and secure. You always knit a row, cut the yarn, reattach it (leaving enough tail), knit and cut and so on. Continue until you’ve reached the top where you will pick up stitches as well and then graft your patch to the top stitches. In the end, all that remains is to weave in the ends which you use to anchor each reknit row to the sides.

It’s hard to explain, but the video shows it well. I have used this method to patch up the cardigan I’ve mentioned before. The big drawback is that you end up with a ton of ends to weave in. But it looks lovely and lies flat. I like how smooth the edges of this patch look.

Now Staci over on Very Pink Knits also posted a video on how to use a knitted patch. However, she isn’t attaching the sides as in the method above. She advises to either leave them loose or sew them down later.

You don’t have to weave in as many ends, but it doesn’t look quite as smooth around the sides as the previous method. Otherwise, they are equal, however.

You can, of course, knit a patch separately and sew it down over the hole – the same way you patch up holes in pants. Depending on what item it is and where you are placing the patch this can look quite pretty, though it won’t blend in as well as the first version. And the fabric will likely lose some flexibility and stretch. Sewn seams are stiffer and less flexible as knitting is.

This is the last version I’ve found of the knitted patch method. It’s similar to the previous ones, and it looks knitted, even though it is not technically knitted. It’s more like grafting but over more than one row. This can work well on smaller holes, but I don’t know if you can use this method to create a taller patch than the one shown here. But if you are using the original yarn, this method will also be quite seamless.

Do you know of any other ways to fix holes in knitting? Which method do you use? Or do you just throw out knitted garments with holes instead of trying to fix them? Please let me know in the comments below. 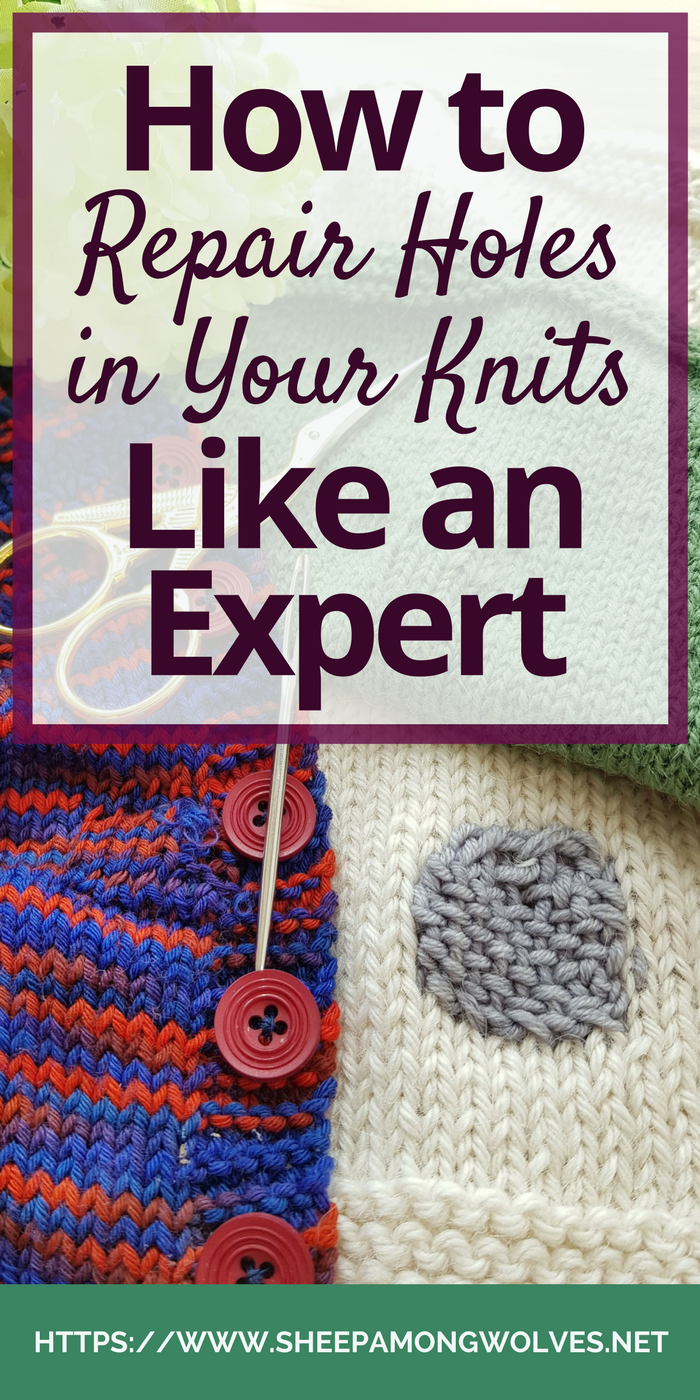 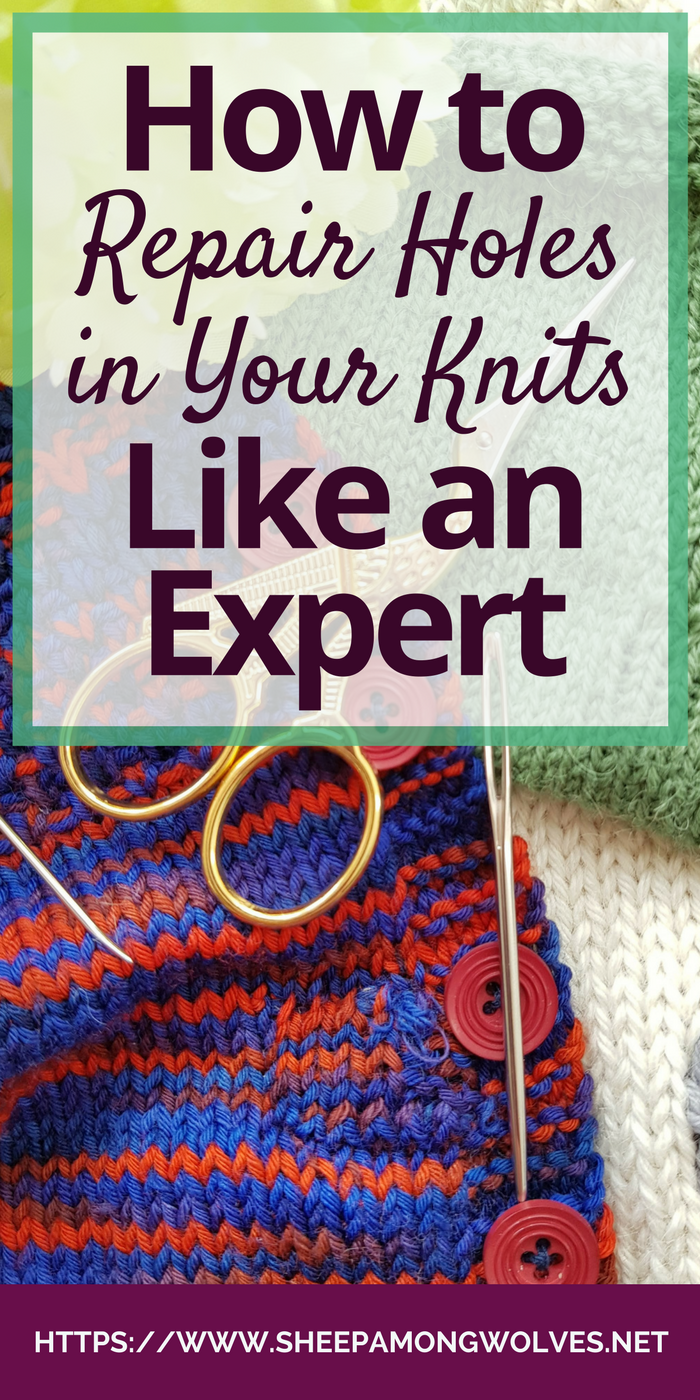